How to solder a component

Building a HIDIOT is easy. We designed it so that it’s almost impossible to get wrong. Take your time, and if you’re stuck, ask our community on Reddit.

If you’re unfamiliar with soldering, you should also get:

Soldering is a way of sticking two things together with a metal (called solder). It’s a bit like hot glue, but hotter and with molten metal. Here’s oneTesla with a walkthrough to show you how it works:

Soldering the components on your HIDIOT is easy, even if you’ve never soldered before. Follow these 10 steps:

If you don’t have tin snips you can use scissors. Make sure you hold one end of the metal you’re snipping to stop it flying around.

Don’t worry if this sounds a little too much to start with. Gwendoline at iFixit has a good video to take you through the basics.

If you still feel unsure about soldering, it’s worth looking at some videos on YouTube. You can always buy some protoboard and LEDs to practice with.

There’s a good order to build the HIDIOT. If you’re happy using helping hands, the order doesn’t matter! If you don’t have or use a pair of helping hands you’ll want to follow this order.

If you find soldering difficult, switch off your soldering iron, get some fresh air and come back to it later. Try to complete a section at a time if you can, but if you can’t, don’t worry. Even if you only solder one component a week, you’re getting closer to the finish line.

We’ll assume that you’re holding the HIDIOT so that the USB connector is at the top right, like this: 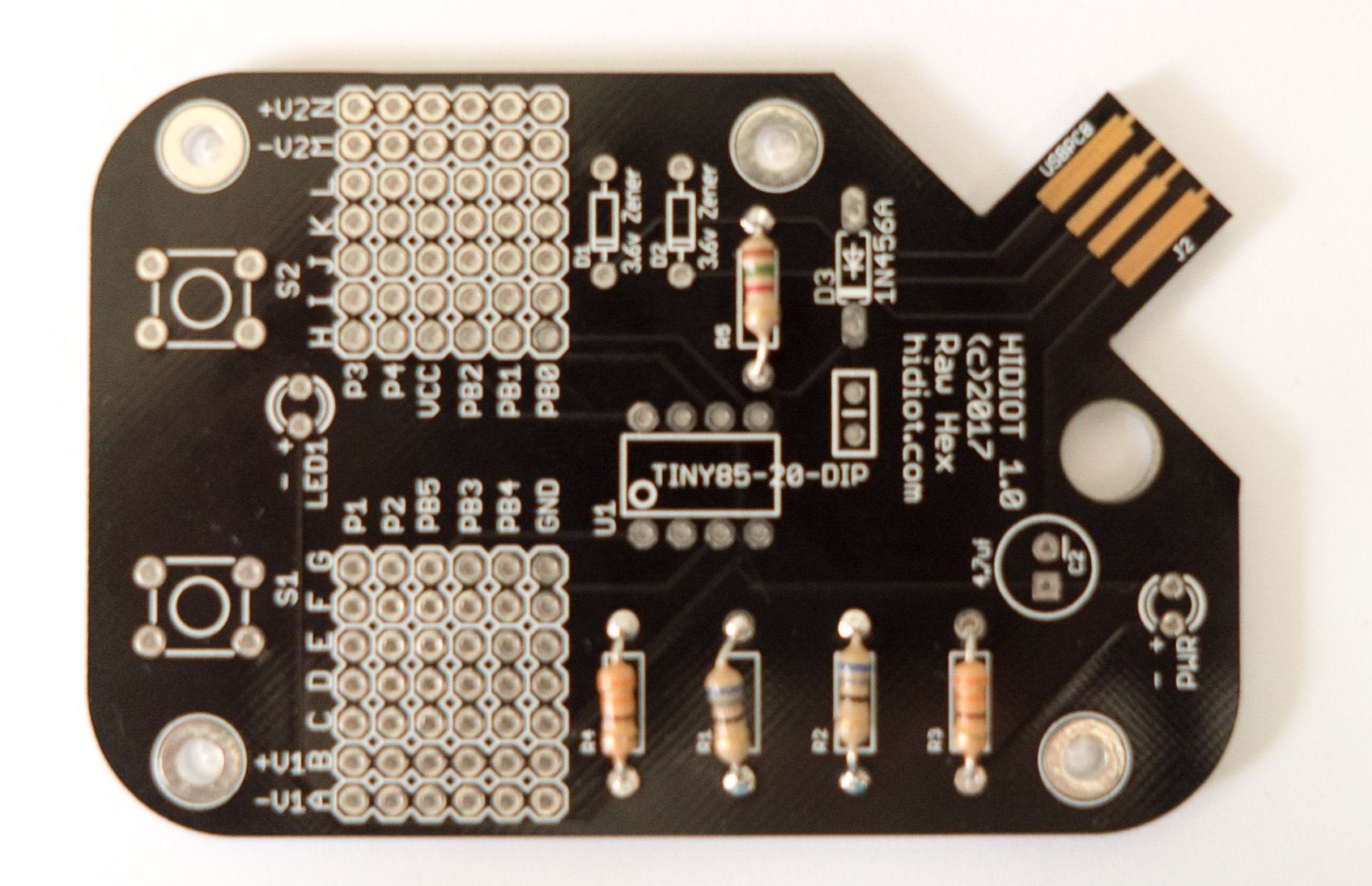 When referring to top, bottom, left, and right we expect you to hold the HIDIOT as in the photo.

When we talk about the front of the board, we mean the side with HIDIOT 1.0 written on it. The back of the board is the other side.

We solder the smallest parts first, then the bigger parts at the end. It should take 30-45 minutes to build in total depending on whether or not you’ve soldered before.

Always remember to stay safe when soldering. Use a ventilated space, wear safety goggles if possible and never touch the hot end of the iron. 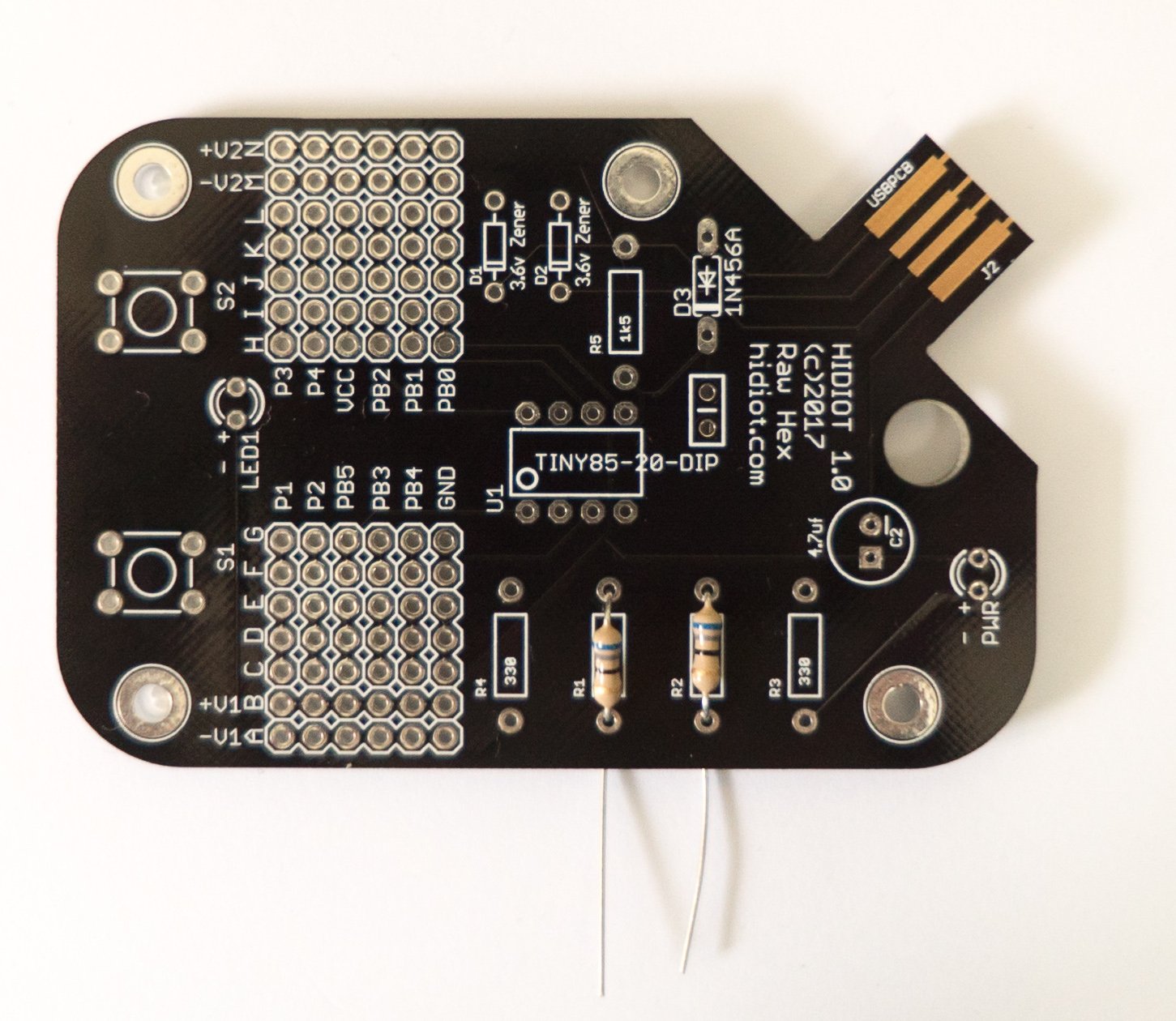 The resistors are what we call passive components. They’re unpolarized, which means they don’t care which way round they go. On the bottom of the board there’s space for four resistors, called R1 through R4. It’s generally tidier to keep them oriented the same way, but you can put the resistors in any direction you like. After all, it’s your HIDIOT.

Resistors restrict the flow of electric current. They stop your HIDIOT from overheating. Resistors R1 and R2 limit current on the lines used to talk to your computer. The also make the HIDIOT’s impedence match the connecting USB cable. 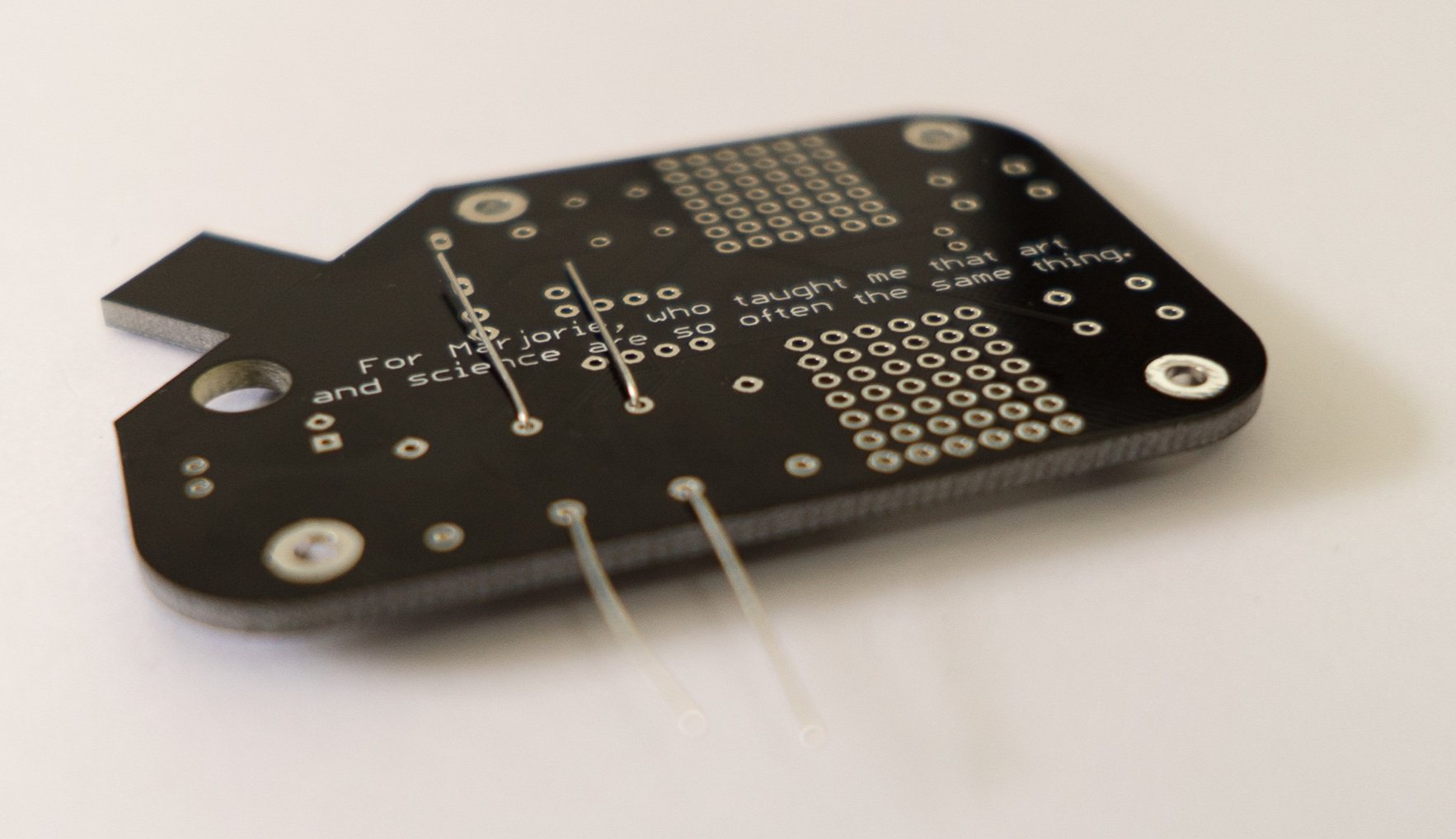 Now you can solder the resistors to the board. Apply the heat first, then the solder. Feed the solder in as it melts until you have a nice full joint, then take the remaining solder away. There are 4 contacts, so you get 4 attempts. If you get it slightly wrong, or it looks ugly, don’t worry. We can fix it later.

Don’t leave the soldering iron touching the board for more than 15 seconds. If you’re struggling to make a join, take the iron off the board, let the board cool down for 10 seconds and try again.

If you’re lucky you’ll have a nice smooth dome over the hole, touching the copper and a metal piece poking out of the top. More likely, you’ll have a big glob of solid metal with a spiky bit. That’s ok. We designed this for beginners! We call the metal spiky bits leads.

Ideally you want a small dome that touches the top of each hole, but don’t worry if you don’t have one. Just remember that it’s a lot like hot glue. As long as there’s contact and parts don’t wiggle, it’ll probably work fine. If you’re stuck, post a photo to our community reddit and ask for a second opinion.

If you have a pair of tin snips, you can trim the leads so that the solder is more or less flush with the board.

Remember to wear safety glasses and hold the metal you’re snipping to stop it from hurting anyone. Nobody likes sharp flying metal bits!

The next two resistors are the 330 ohm R3 and R4 resistors. These go on either side of the R1 and R2 resistors you just soldered.

R3 limits the amount of current the power LED can draw. R4 limits current flow to LED1. LEDs are greedy and will gobble up all the current they can. Resistors stop them from doing that. They also stop them from burning out.

If this is your first HIDIOT, then you should solder all the components. R3 and R4 are only needed if you’re going to solder the LEDs. If you’re not using the LEDs, you don’t need to solder R3 and R4.

The R3 and R4 resistors have an orange band and look like the ones in this picture above. Solder the resistors to the R3 and R4 points on the board. Remember, they don’t mind which way round they are. It looks nicer if the gold band is on the same side of the board as R1 and R2.

If you have your own LEDs you’d like to use, you can use Ohm’s Law to work out what value resistor you’ll need. Evil Mad Scientist (No relation to Steve) can help you here.

R5 is a 1.5k ohm resistor. R5 tells the USB host that the HIDIOT is a a low speed USB device. It’s the only resistor that looks different to the other 4 you soldered earlier.

Like the other resistors, R5 doesn’t care about which way round it is. R5 goes above the Tiny85-20-DIP socket, opposite R1. When soldered, your board should look something like this. 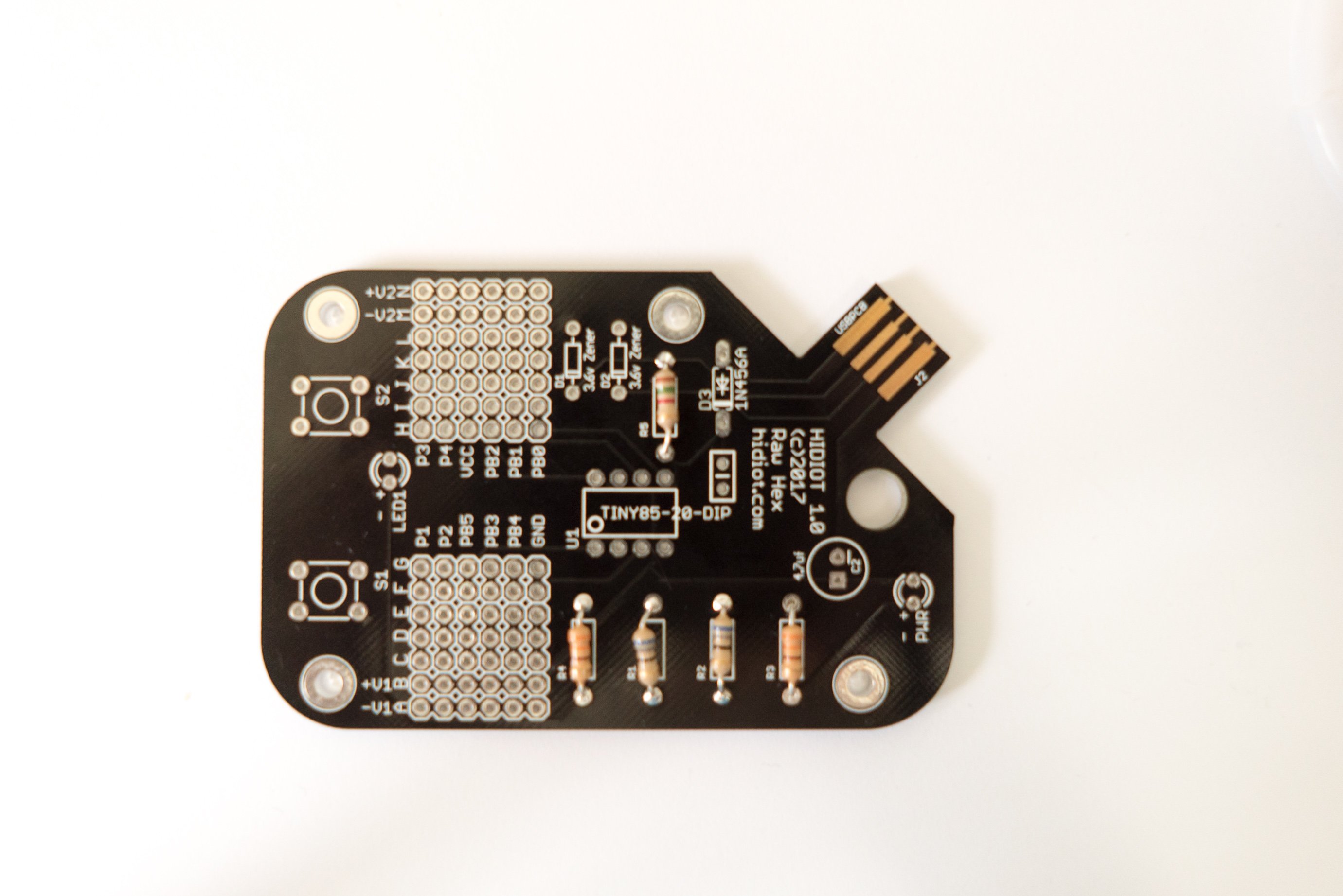 Once you have your first four resistors soldered in and snipped, take a good look at your handiwork. Nice job!

If this is your first time soldering, now would be a good time to have a break. Switch off your soldering iron if you’re not going to use it. Have a nice refreshing drink before carrying on. When you come back you’ll find soldering should start to get easier.

When you get back, we’ll solder diodes, capacitors and sockets!