Programs created in the Arduino IDE are called sketches. We’re going to look at an example sketch, and go through some of the concepts behind it. We’ll also look at some of the differences between programming an Arduino and programming the HIDIOT.

A short history of computer programming

You might not know this, but computers have been around for a very long time. In fact, they’ve been around for hundreds of years, if not longer. Many centuries ago, computing was a job that humans did. Human computers would produce books containing pre-calculated numbers for everything from trigonometry to tax calcuations. If they made a mistake, it was tough luck. You’d have to wait till the next edition to find out.

Although the first adding machines have been around for 5000 years, modern computers like the HIDIOT haven’t been around for very long at all. In fact, here’s Rambling Hambling with a 10 minute rundown on the history of computers.

Now we know a bit about how computers came to be and, compared to cars, moon rockets and even planes, how young modern computers are, we can start looking at how Arduino sketches work.

Why use an Arduino Sketch?

We could do all this with a Raspberry Pi and something to change the Pi’s 3.3 volts to 5 volts, but that’s a bit of a waste of a Raspberry Pi. It’s great that we can use an entire computer running Linux to control a strip of coloured lights, but we can do the same thing with something much smaller and much cheaper, freeing up our Raspberry Pi for important things like RetroPie or Minecraft.

Arduino sketches are great for smaller things like the list above, but because the HIDIOT is a little bit smaller than an Arduino, sometimes it makes sense to look at what’s happening under the hood. This is the difference between developing and hacking.

Developers understand what they’ve been told, and do things the way they were told to do it. Hackers gain deep knowledge of something in order to make it do what they want.

The common commands you see in an Arduino sketch are mostly helper commands wrapped around a professional language called C. Some people are scared by C, because they don’t understand it. Because the HIDIOT is quite small, we’re going to write a mix of Arduino sketches and pure C. It’s enough to make the most of what we have, without making things too complicated for no good reason. Think of Arduino sketches as training wheels on a bicycle, and C as a racing motorbike. We’ll start out nice and slow with sketches, and work our way towards C as we understand more and more of it.

C is a language that’s used in everything from MacOS, Windows and Linux to the International Space Station. Code written in C runs on your computer, in cars, on planes and in hospital equipment. By learning a little C, you’re already putting yourself way ahead of most developers.

Lets start by taking a look at our Blink sketch. 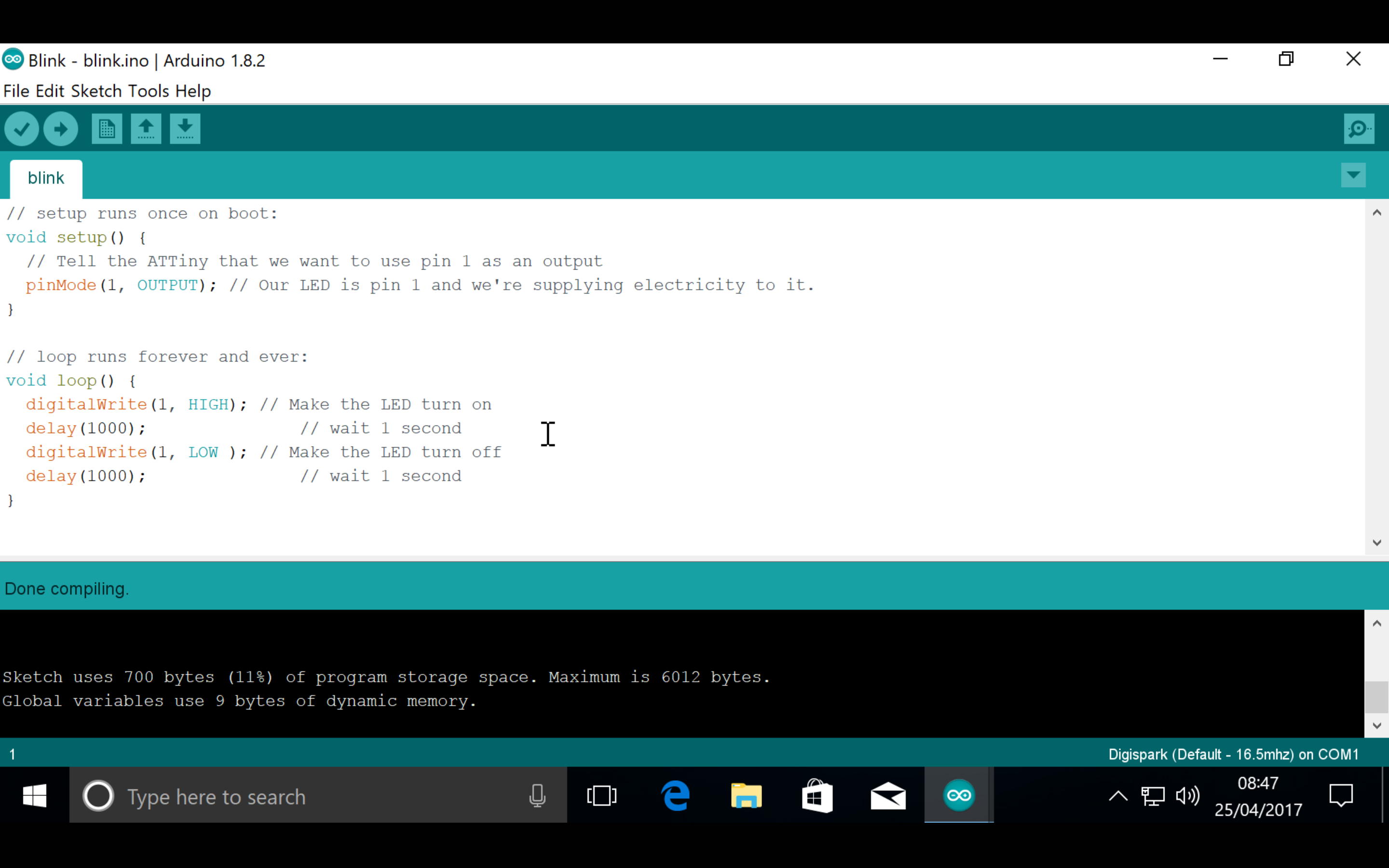 Every Arduino sketch contains two blocks of code, setup() and loop(). We call a block of code a function. We give the block a name and then we can reuse the code inside whenever we need to. Sometimes we only use a block once and use standardised names for specific purposes (such as setup() and loop()). Sometimes we use functions for things we’re going to do again and again so we don’t have to keep writing repetitive code.

The setup() and loop() functions are in every Arduino sketch.

In sketches (and in C), functions are defined in a very specific way. Because functions are typically called by other code, a function has to define what it sends back to that code when it completes. Don’t worry if that sounds a bit confusing right now, we’ll look into it later.

For now, all you need to know is that void means that when called, the function executes the code contained inside, and then exits, sending nothing back.

The parentheses or “()” symbols are used to specify options, also called arguments. Again, we’re not using them for now but will later on, so don’t worry if it doesn’t make complete sense. When referring to functions, we’ll mention their name followed by a pair of parentheses just so we don’t confuse them with other things we might find in our code.

This means that the function setup has no arguments, does some stuff between the curly braces and exits, sending nothing back to the code that called it. Lets take a look at what our two functions do.

The setup() function runs once the program starts. It’s normally used to set up inputs and outputs, and anything we need before the main part of our program runs.

The loop() function runs continuously until the HIDIOT is switched off or reset. Once it reaches the end of the block, it goes back to the start.

Before we go any further, this would be a good time to take a 5 minute break. We’re going to go through some computer science concepts that if new, might need a bit of time to get familiar with.

Inside our functions are statements. A statement is an instruction to do something, and ends with a semi-colon “;”. As well as statements, we also have comments. There are different ways of writing comments (to remind us what a piece of code does), but in our example, we’re using single line comments, which start with “//”. The very first line in the program is a comment, telling us that setup runs once on boot.

Lets take a look at the setup() function and see what it does.

The first line inside the function is a comment that describes what the function does. The first actual statement is a call to pinMode(). The pinMode() function configures a pin to behave as an input (so we can read it), or an output so we can use it to send data or supply voltage.

Unlike setup() and loop(), pinMode() expects two arguments. The first is the pin number (which we’ll come to later), and the second is the mode, which can be INPUT or OUTPUT.

In our code, we’re setting pin 1 to be an output. That means we want to be able to supply a voltage to pin 1. We’ll look at the pin numbering system in a later tutorial, but for now just know that pin 1 is PB1, which is connected to our programmable LED.

There’s a full reference guide for all arduino functions online.

Lets look at the loop() function in our code next.

We know from what we’ve learned so far that the loop() function takes no arguments and returns nothing. There are two functions that are called in the loop, lets take a look at the digitalWrite() function.

The digitalWrite() function allows us to turn a digital pin on and off. When we turn a pin on, we supply our chip’s operating voltage and say that it’s set to HIGH. When we turn a pin off, we supply a voltage of 0 volts and say it’s set to LOW. Because our ATTiny85 is configured to run at 5 volts, setting it to HIGH means supply 5 volts on this pin. If our ATTiny85 ran at 3.3 volts, HIGH would mean supply 3.3 volts on this pin. This is important to know, as supplying 5 volts to a 3.3 volt device could damage or even destroy a 3.3 volt device.

The delay() function does what you probably think it does. It takes one argument, in this case, the amount of time to pause (in milliseconds). If you need to wait for a little less, you can use delayMicroseconds() to wait for less than a millisecond.

Looking back at the program, we can now understand what it does. Lets break it down:

If that breakdown matches what you’re thinking, then great! You fully understand what this program is doing. Unlike say, on your main computer, you know that when you tell the HIDIOT to supply 5 volts to pin 1, LED 1 will light up. This is the kind of detailed knowledge only a hardware hacker would have.

There’s a fair bit to take in, so you might want to have a break. When you’re ready to carry on to the next section we’ll take a look at another important programming building block: values.