People have always looked for ways to make difficult things easier to do. Whether it’s a physical problem like lifting a heavy weight or a technical problem like inserting lots of data into a spreadsheet, the answer usually involves getting others to help you or using some kind of tool.

Having a friend or colleague to help you out makes things easier. You can share the workload and often get things done twice as fast. Sometimes though, there’s no-one around to help out.

Using a tool to make your work easier or make you more efficient is a great idea and sometimes there’s an even better tool for the job. Sometimes the tools are so good, that they start to replace the people who did the work before. This video by CGPGrey talks about how automation continues to change the way everything is done.

We can use the HIDIOT to do the boring stuff for us, or to make us better at computer games. The HIDIOT can automate anything we do with a mouse, game controller or keyboard. Thankfully it’s not smart enough to replace us completely. Sadly this means you’ll still have to write your own homework, at least for now.

Let’s use the HIDIOT to automate things for us.

HIDIOT in disguise: pretending to be a keyboard

If you’ve already completed the Exploring Morse Code tutorial, you will have encountered the #include directive which allows you to import libraries.

If you’re not working through the tutorials in order don’t worry too much about what this does - it will make more sense when you do the Morse Code tutorial. All you need to know is that it lets you re-use code written by yourself or someone else to save time.

You can write your #include statements in one of two ways:

The difference between the two methods is that quotes ("") tell the compiler to look for a file with that name in the same directory as your program file. You would use this when you’ve written your own library and saved it. The angled brackets (<>) tell the compiler to look in its own directories where it stores lots of ready made libraries. You would use this to import commonly used libraries that come bundled with the IDE or compiler you are using.

From the compiler’s view this is a lot like global and local variables. The Arduino does some smart searching to make sure it uses the right library but if you decide to use C outside of the Arduino IDE, you’ll need to make sure you use it correctly. It’s good practice to get it right here.

Now that we have imported the DigiKeyboard library, we can use it to write a program in the Arduino IDE that will write a message by emulating a keyboard. Let’s take a look at the whole program first and then break it down line by line.

Wow, that’s quite a short program. As you can see, it’s really easy to use the HIDIOT to impersonate a keyboard! Let’s look at what the program is doing:

If you upload the code above it’ll start, wait 5 seconds then type out “Hello, HIDIOT!” and press return, before repeating. If you don’t want the text to appear in your Arduino IDE, open up a notepad window immediately after you upload the program to your HIDIOT. You should see something like the screenshot below. 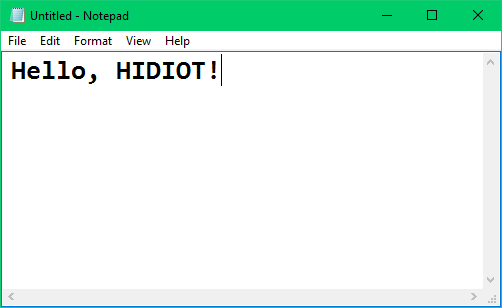 That’s pretty neat but wouldn’t it be better if the HIDIOT could open up notepad for us in the first place? Well, with a little work, it can!

In Windows 10, there are several ways to open a program. We could use the mouse to click on the Windows button, then find notepad in the menu and click on it. The HIDIOT could do this, but it would be limited. The HIDIOT can’t see the screen, so if the screen resolution is smaller, or a mouse moves faster on a different computer it’ll miss and won’t launch notepad.

A common shortcut to the run command on Windows is to press the Windows key and R at the same time. This causes a run dialog box to pop up. We can type in the command we want to run and press return. This is a job for our setup() function.

If you use a Mac, you can use cmd + space at the same time to launch spotlight, and replace notepad with textedit in the code listings to get the same effect.

Try using the Windows and R keys to bring up the dialog box. Type in notepad and press return. If Notepad pops up, you’re ready to go ahead. If not, it might be worth asking in our community reddit for help.

Now we know what we want to type, the next thing to do is to decide where to type it. We only want to do this once so let’s use setup() to start notepad.

It turns out that a USB keyboard doesn’t really send letters when you press a key. Instead, it sends codes. Most of these can be found the USB HID Usage Tables standard document.

The HIDIOT knows this, and instead maps keys to codes to send as key strokes. Functions such as DigiKeyboard.println() take a string, split it into keypresses and send each keystroke individually. The DigiKeyboard.sendKeyStroke() lets us send individual key strokes.

That’s great but we need to press both the Windows key and the r key at the same time. The same function can also be used to send multiple keystrokes at once.

In computing, the Windows key is called a modifier key. A modifier key changes the action of other keys when pressed together. Other modifier keys on your keyboard include Alt and Ctrl.

To send two keystrokes, we separate them with commas, like this:

If we want to send more than one keystroke, we can use the pipe symbol to separate them, like this:

We might need to wait a moment for the Windows dialog to appear if it’s busy, so we’ll add a small Digikeyboard.delay()

Once we have our dialog box up, we just need to type in notepad and return. We can use the same code as before for this. Our final setup() function should look something like this:

The loop() function should remain unchanged. Upload your program to your HIDIOT and you can watch it open up notepad and type out your message.

So far, you’ve learned how to:

Have a think about other things you could automate. Could you create copy and paste keys using the tact switches? That would be a little boring. How about automating the boring stuff in minecraft?

AutoIt is a powerful program you can use to control any aspect of your computer from a single keystroke. You could use AutoIt with the HIDIOT to automate your browser and control devices in your home. For example, a light sensor connected to your HIDIOT could trigger an AutoIt script to turn your lights on when it gets dark.

You could even use the HIDIOT to lock the computer after a random amount of time as a practical joke on friends (although you should only do this with the owner’s permission).