Getting started with tact switches 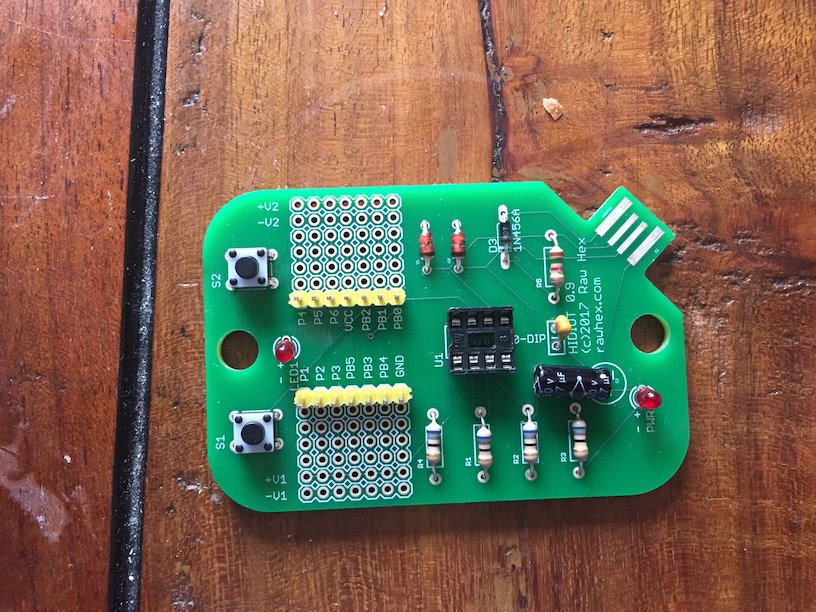 If you look towards the left of your HIDIOT you’ll see two buttons (or two spaces for buttons if you didn’t solder them in). Professionals call them momentary tactiles switches or tact switches for short. There are many different types of button and switch out there, and you can use them all with your HIDIOT.

In the electronics world, switches perform a very simple function. They open or close a circuit. If you remember from Electricity and you we created a circuit using a coin battery, an LED and a piece of paper. We can draw this circuit using standard electronic symbols. 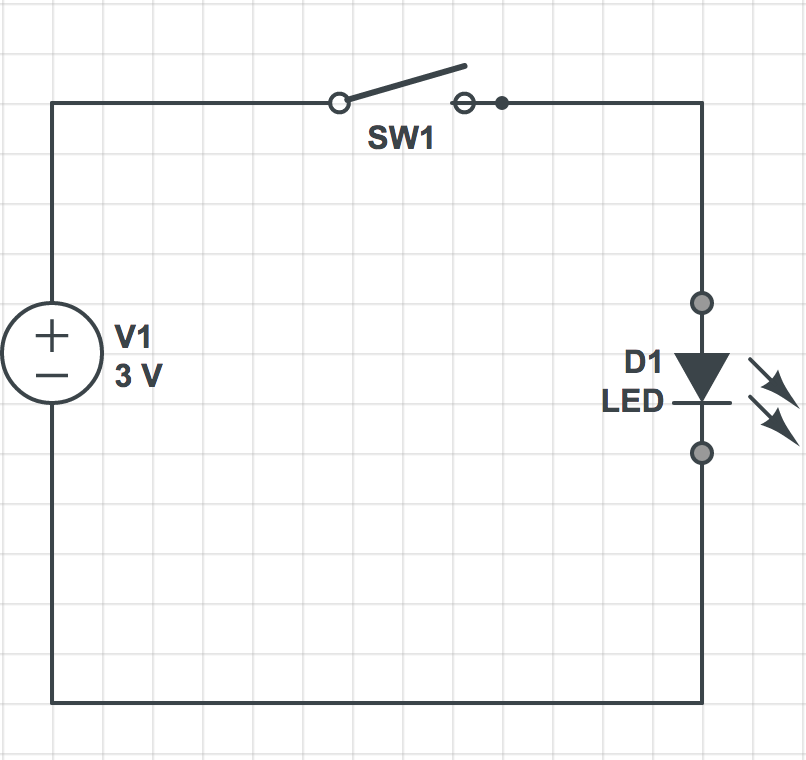 If you look at the picture above, you can see the circle with the plus and minus symbols represent our coin battery. The triangle and line with two arrows is the symbol for an LED. The arrows pointing away mean that this is an LED. The Triangle points in the direction of current flow (from positive to negative. At the top there is a strange symbol for a switch.

Even though our piece of paper doesn’t have a button it’s still considered a switch in electrical terms. Specifically, it’s a single pole, single throw switch. The term pole means the number of circuits that our switch can manage. Throw means the number of circuits a switch can manage. Here’s Collin Cunningham to walk you through some of the many different types of switch you might see.

If you have an old remote control that doesn’t have a use, why not take it apart and see if you can see how it works? As well as the buttons, what other components can you see that you recognise from the HIDIOT?

When taking things apart, make sure you lay out the screws on a flat surface the same way they go back in. It’s easier to put things back together this way.

If you’ve spent a bit of time looking around for switches and pulling apart remote controls now would be a good time to have a break. When you return we’ll look at how we can use switches with the HIDIOT.

The two tact switches that come with your HIDIOT should be connected to PB0 and PB2 on the ATTiny85. If you haven’t soldered them to the board, you’re going to need to connect them to follow the tutorials.

If you don’t want to solder them, you can use a breadboard and some jumper leads to connect them up. Just remember to connect one pin of each button to ground, and then the opposite pin to either PB0 or PB1.

If you need to solder them take another look at our assembly guide before you start.

From this point on we’ll assume you have your tact switches properly connected to PB0 and PB2.

Now we have our switches connected, lets get started using them! As always, there’s pre-built code in the HIDIOT tutorials example library. Try to play along first if you can. We assume you have the standard LED connected to PB1. You can of course use a buzzer on PB1 instead by declaring BEEP.

The first thing we need to do is add some simple declarations to tell our HIDIOT about our tact switch and LED pins. We’ll also declare a couple of variables to track their state.

We’ll add basic on() and off() functions so we can control either an LED or a buzzer.

Finally, our loop() function checks the state of either button. If either value is HIGH then we turn on the LED. If the value is LOW then the current isn’t flowing and we’ll turn the LED off.

The || is a way of chaining together two conditions so they apply if either one is true. We’ll look at it in depth later.

By the way, this code is fundamentally flawed and won’t work. It makes the same the mistake everybody makes the first time they use tact switches. Don’t worry, upload the code and give it a go but don’t be surprised if it doesn’t work properly.

So what’s going on? Why isn’t it working the way we expected? Remember switches are opened or closed. When they’re closed, the current flows. When they’re open, the current doesn’t flow through the circuit. The pin however isn’t tied to ground, it’s dangling in the air. This is the cause of the problem.

When a pin isn’t connected, we call it a floating pin. That doesn’t mean that there’s no energy around. In fact, there’s a lot of energy in the air already because we’re surrounded by electrical devices. That energy bombards the floating pin and causes it to change state between HIGH and LOW.

James over at AddOhms has a really great explanation of what’s happening. He also shows us what we can do to fix it.

Now we know that using a resistor to pull the pin up to 5 volts will cause the problem, how do we add that to a finished PCB? Don’t pack your HIDIOT up to send it back just yet. We have an internal pull-up resistor on each of the ATTiny’s pins. All we need to do is change our setup() and loop() code and it’ll work fine. In setup(), replace the INPUT in the pinMode() calls with INPUT_PULLUP, like this:

Using INPUT_PULLUP pulls the pin up to 5 volts when the circuit is open. When the circuit is closed by the switch, it’s pulled low to ground. The value we read will then drop from HIGH to LOW. This means we need to change our loop() function to check for LOW states instead of HIGH, like this:

Upload your modified code to the HIDIOT. You should find it a little more responsive.

What’s with the pipes?

Look at the if control block inside loop(). So far, when we’ve used if, we’ve used it like this:

As well as a > b, we can use different symbols to mean different things. These symbols are called operators. A few of these operators are explained below:

These types of operators are called conditional operators, because they’re used to compare values.

The || symbol is a logical operator. Logical operators connect two or more statements together and are used to evaluate conditions based on what’s called boolean logic. We’ll look at boolean logic in more detail in a later tutorial.

The || symbol is the logical operator for OR. In our if statement this means:

The else clause simply means “If the above isn’t true, do this instead”.

So far we’ve looked at how to use buttons to turn on an LED. We’ve learned what a floating pin is and why it’s bad. We’ve also looked at some logical operators.

In the next section we’ll learn about other ways of managing buttons, or in our case tact switches.

Have you ever wondered why computers use true and false, and 1 and 0? The answer is because of Information Theory, invented by Claude Shannon.

Adam Westbrook made a brilliant short film about Shannon’s role in the leap from the analogue to the digital age. Shannon was initially concerned with communication, but in the process he laid the foundation for the logic used in computers today.